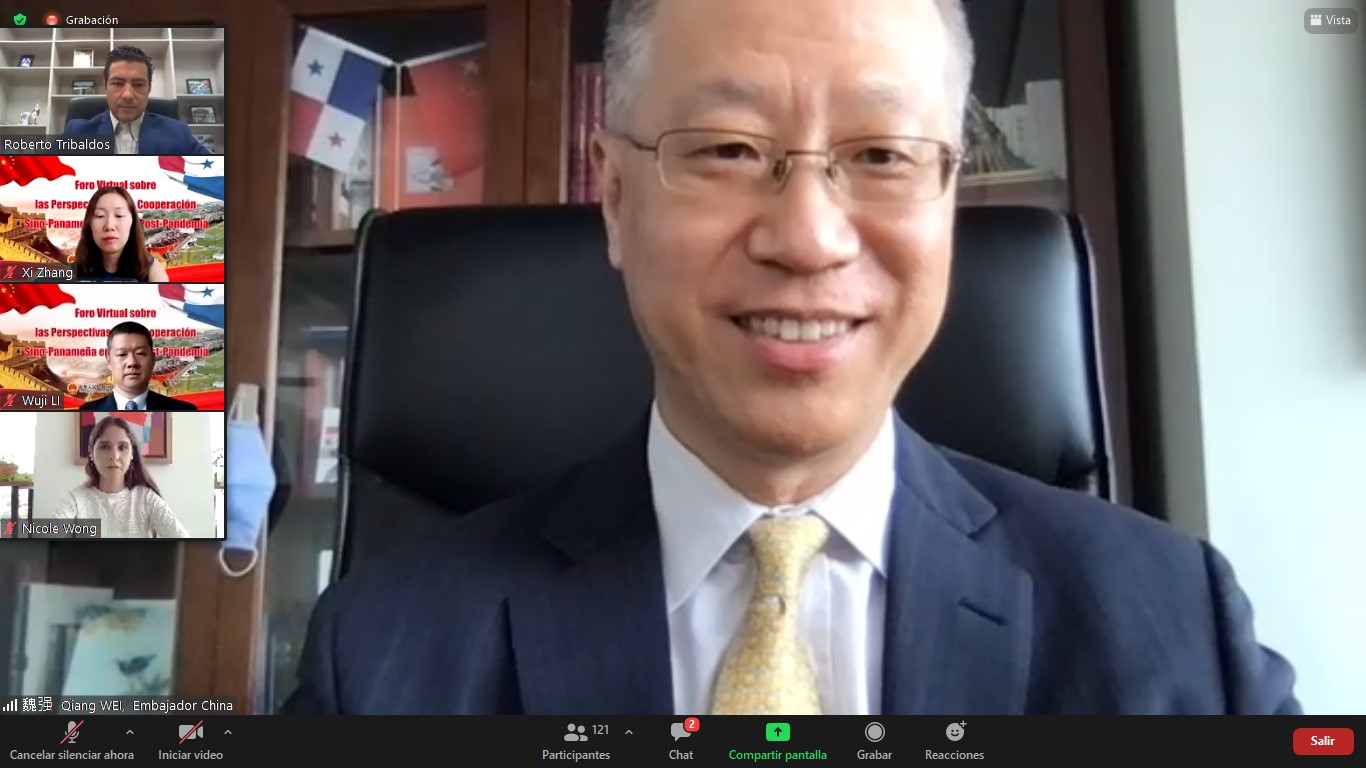 Panama June 15, 2021
The virtual forum on the prospects for Sino-Panamanian cooperation in the post-pandemic era, on the occasion of the 4th anniversary of the establishment of diplomatic relations between the Republic of Panama and the People's Republic of China, began with welcoming remarks by Ministers Erika Mouynes and Ramon Martinez, of Foreign Affairs and Trade and Industries, respectively, and the Ambassador of the People's Republic of China, Wei Qiang.
In her speech, the head of Panamanian diplomacy referred to the diplomatic, commercial, cultural, cooperation and educational achievements in these four years of diplomatic relations, as a result of important approaches between the two countries.  He highlighted the cooperation received from the Chinese government and companies in the midst of the pandemic, in response to the fight against Covid-19. He also thanked the educational assistance received through the Scholarship Council and the Ministry of Commerce of China, which has allowed Panamanian professionals and students to benefit from higher education scholarships.  He also referred to China's role as a user of the Canal and supplier of the Colon Free Zone.
In this regard, participants noted that 19 Chinese companies are in the country with SEM status (headquarters of multinational companies) generating more than 1,500 jobs; and 70 Chinese companies have a presence in the Colon Free Zone. Additionally, it was reported that Panama can export to the Asian giant: meat, chicken, cobia, pineapple, banana, among other products.
The Minister of Commerce and Industries, the Minister Counselor of Private Investment Facilitation, José Alejandro Rojas and the Executive Director of PROPANAMA, Carmen Gisela Vergara agreed that the National Government is aware of the magnitude of the challenge faced by the post-pandemic world, which is why it will continue to coordinate efforts to facilitate Chinese investments in Panama and boost exports of Panamanian products to the Asian giant.
Other participants included the executive director of the Chamber of Commerce, Industries and Agriculture of Panama, Rafael Zuñiga; the director of the Institute of the Panama Canal and International Studies of the University of Panama, Luis Navas, among other speakers.
The Republic of Panama and the People's Republic of China have signed 48 agreements on trade, maritime, cultural, tourism, legal, political, educational and cooperation matters.